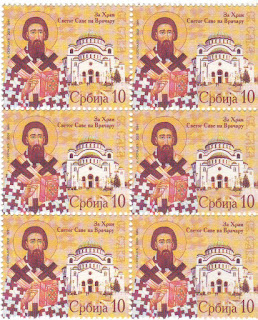 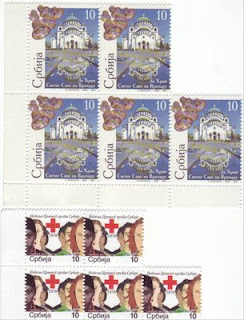 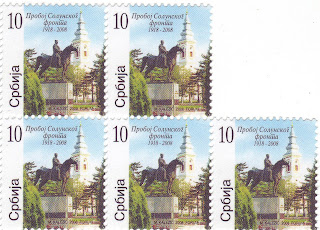 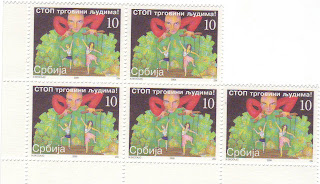 2008 postage due 1, 2, 3, 4, 5:
It is issued for "Stop to trading with human", really interesting way to fight woman and human traficking, which are today plague, mostly in Kosovo Serbian Authonomy, and other undeveloped countries. But most traficking that supply slaves for west european countries come from Kosovo where UN and other european forces control most of this black market.
Because that I see that Serbia try to rise this topic by issue that have an design of "toy theatre" person handling woman on rope, most is "funny" that on behind of "theatre" are "forest" from US $ banknote (I don't see there euros - why?).
One stamp issued, with face value of 10 Serbian dinar, for sure this stamp will be banned for use on Kosovo teritory, simply, because it will made some "bad feeling" in administration there, too much shame for Kosovo muslim and UN and NATO forces, that also use this "services".
It is also cheap in comparation to other issue, and dealer are asking 0.36 euros for this one stamp. I think it is an really interesting issue and worth to have.
#2: Precise date I don't have, but it is issued to commemorate WWI battle on Solun, it is one simple design, that we know from before, actually it is used on many occasion, mostly on postage dues, using statue from central square in Belgrade. This one have like usually, low face value of 10.00 dinar, it is around 0.20 US$, and dealers will sell it almost little bit more, let's say for 0.30 US$ You will have it in any quantity You need.
#3 and 4: again I don't have an precise date for this issue, but one is from "Week of Red Cross" issue, and second is for "Sveti Sava" Church in Belgrade (Vrachar) - typical like usually by design, with picture of Church Holly Sava and in second stamp is red cross symbol with human face on it.

I can say just common in all respect - nothing that have some "more" on it, and face value are low like need to be when post put hand to poeples pocket, even when it is in humanitarian intention. Both stamp have 10.00 serbian Dinar face value, that are together around 0.40 US$, and dealer will give it maybe 20-30% up of face value.

#5: Like usually at this time, and around this time, Serbian people are again in position (if they want or not - dosn't matter - it is democracy) to support construction of churches around. This one go for Sv. Sava (Vrachar - Belgrade) - not big money in face value, just 0.20 US$ per one, but, if someone in one week need to send 100 mail, it will cost him. Design is "like usually" - nothing more to say.

Posted by Balkanstamp at 4:27 AM No comments: 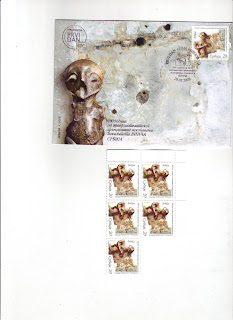 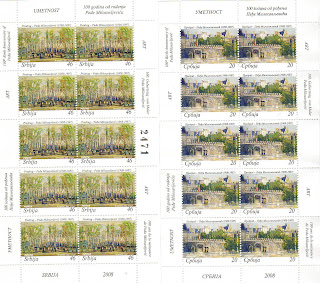 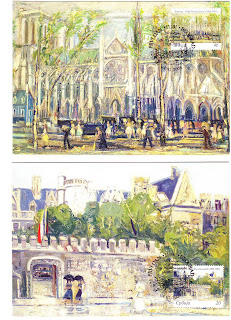 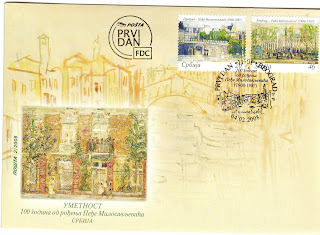 Here we start with first issue, "Art - Paiting" issue for 100 year of birth Pedja Milosavljevic, issue of two value, 20 and 46 Serbian dinar. It start with two work of this author, nice item to be included in every art collection.

Not something great issue, but important for all collectors that collect "Archeology" topic, it celebrated 100 year of first systematic archeological excavation in Vinca site.
Neolitic period site, where is discovered most items from this period, and stamp have design of :Lady of Vinca" statue that are discovered there.
Date of issue are Januar 28, 2008. One stamp face value of 20 dinar, and selling for 0.72$, FDC will go for 2.72$.

Posted by Balkanstamp at 4:11 AM No comments: