Here we go to 2011 year.
Yes - little bit too late, but have an reason, probably all dealers with Serbia stamp, will have same reason with be late - it is "Jugomarka" fault at all! Why "Jugomarka"? Because this company, and complete staff of it, allowed someone from politician, to "press" it, and "Jugomarka" are closed, filled for bankruptcy (?), eliminated and "reborn" on new name - "Serbiamarka"! My personal opinion about it are very
negative - simple say: "Who are shame of own past - didn't
deserve future"!
Let's talk about stamp:
1-2011 - "Preserve Polar":
I don't think that this issue deserve any compliment! It is so poorly designed that I can say just "shame"! And more than that - to start year with so poor design is not good omen. What we have is one m/s with two stamp, face value of 112 dinar, not cheap at all - on marked will cost around 1.68 euro, knowing exchange rate - it will be out of reach for USA market! Issued on May 31, 2011. 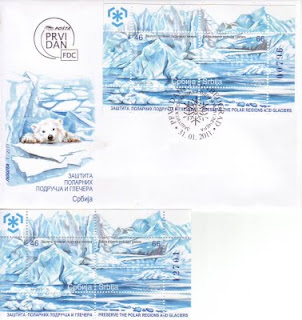 2-2011 - "Lunar Horoscope":
Little bit better design than previous issue, but not something to made "joy" in collectors heart! It is one set, issued on Feb. 7, 2011, that will cost You
around 1.43 euro in local dealer. Probably will have better rating than first issue, but it will be just because topic alone - not because design. 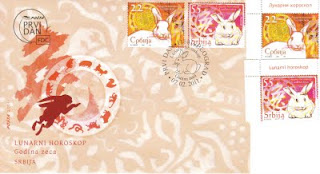 3-2011 - "International Telecommunication Union":
Issued to celebrate Serbian membership from 1866 year - nice to know and remember! When I see stamp alone, have an different feeling than when I see sheet of 8+1 stamp - it is much different picture, probably to better! Single stamp, that will cost You some 0.85 euro in shop, but You will easy find it around Phila Forum for exchange (if You have something to offer). Issued on Feb. 9, 2011. 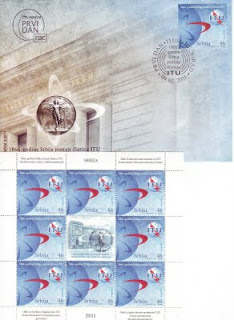 4-2011 - "Art and Judaica":
Finally arrived first better design this year, where we have 4 stamp in set. Issue come out on Feb. 25, 2011 - to celebrate 100 year of birth artist Bora Baruh, artist with very sad family history, that ended in WWII period. Jew by nationality, executed in Jajinci prison. Worth to mention, that he lived in France, but "Serbian brother" - French - expelled him from France(political reason). Like I mentioned, set have 4 stamp, high face value, will cost You 3.10 euro, but for set of 4 FDC prepare much-much more! 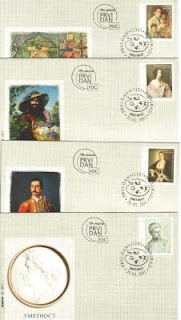 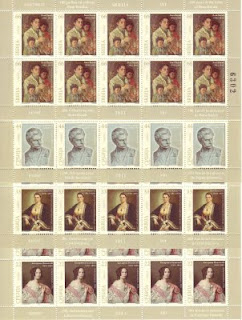 5-2011 - "100 year Music School":
One single stamp to celebrate 100 year of "Stankovic" music school. Not so bad design, but hardly important from collectors view. Probably just topic "music on stamp" will fit, or probably also "Architecture" - we will see. face value are minimum in dinar, and from dealer You will need to pay some 0.41 euro, not expensive for one stamp. Issued on march 15, 2011. 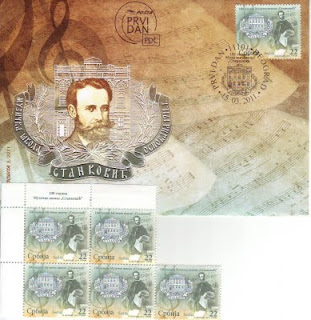 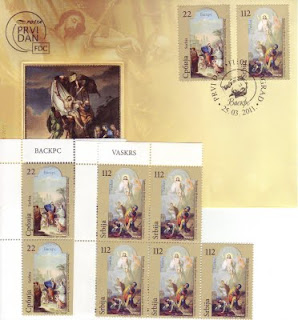 7-2011 - "Serbian National Theatre 150 yr":
I will not say "ugly", but can be done much-much better for this important institution and celebration. What to do - if nothing else, printing was done in good way by Forum Printing Plant. Again, single stamp with minimal face value, prepare 0.41 euro for it. Postage due 1-2011 - "Cancer, Avala Tower":
Here like usually, I don't have any other information than that what i see on stamp, and it is "fight cancer" from set that is coming every year, and second stamp have really important memory. Second stamp with picture of "Avala Tower" are great work of Serbian people and country alone. It is rebuilt from "floor" after NATO bombardment and destruction of civilian object during last Yugoslavia civil war. Still no one from NATO countries are not charged in court for this act that present us with great barbarian way of life today! Probably it fit in "New World Order" like someone call today's democracy! I recommend it for all collection to be included!
Face value are also not minimal, if we know that minimal face value inland mail is 22 dinar, and this "Avala" stamp are valued 44 - it is really good money, hope that it will go to finance this project, that many artist and people around world donated to rebuild. translate it to 1.01 euro for this two stamp. 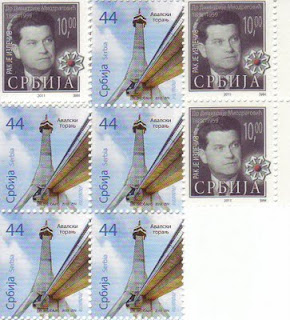 Posted by Balkanstamp at 11:14 AM No comments: